This image appeared on the Facebook page Homeschool Quotes a couple of months ago: 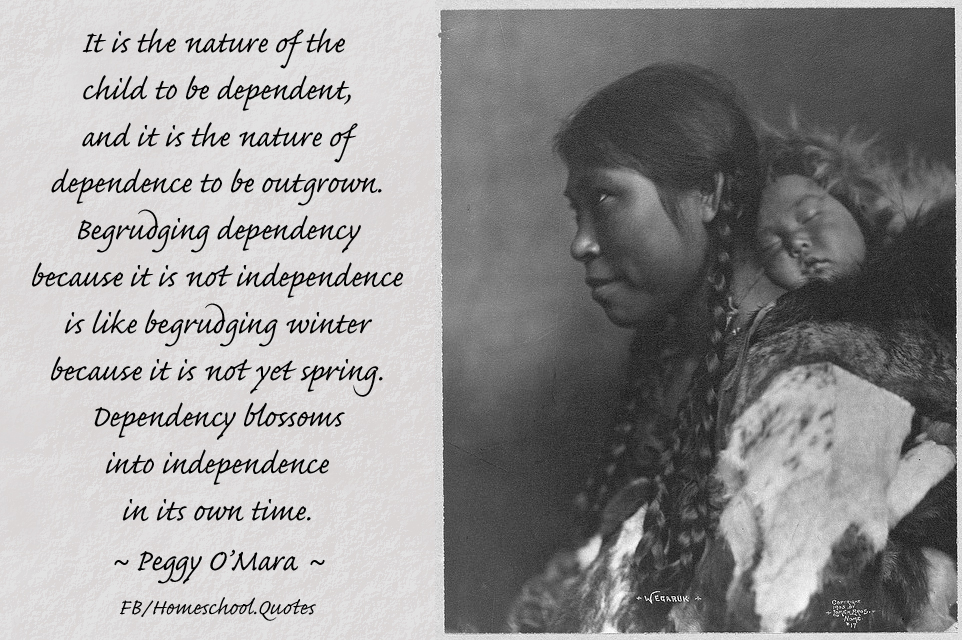 One of the commentors responded (this is her post as is, with no corrections):

That’s some silly stuff !!! Don’t make them do what they need to do if their crying , please! In that case most kids wouldn’t do anything . lol . Or eat anything

Really? You should tell my kids they’ve been doing it wrong all these years. I have two teenagers and two elementary children who were raised pretty much by these principles, and they do lots of things!

Each of my children co-slept with me for several years. Guess what? Once they were ready to move into their own beds, they did so, and never came back. No sleep training, no crying it out, no forcing them to sleep independently before they were ready … yet none of them still sleep in my bed. (Full disclosure: the 9yo, my baby, likes to climb in bed with me when her dad’s out of town.)

Of course as homeschoolers none of my children had to face daycare, but my oldest child was very fearful and clingy and would not leave me to go to her Sunday school class. So I spent a few years keeping her with me, sitting in the parents’ room or actually going to her class and helping out there until she was ready to go on her own … and yes, she eventually went on her own, around first grade, and once she was ready there were no tears or balking or distress.

I didn’t consider it a big deal to “have to” spend time with my daughter and save her from acute and completely unnecessary distress. I didn’t damage her trust in me.

Considering that we now know she actually has Asperger syndrome (EDIT: now called HFA or high-functioning autism), and she has trouble connecting with people intimately, I am grateful a thousand times over that I followed my instinct to reinforce our connection rather than doing anything to weaken it, simply for my own convenience.

My other three weren’t as needy; they stayed with me during the nursery years but once they reached toddler classroom age each one went without a whimper. Nice to not dump a screaming child on an overwhelmed teacher!

What They “Need to Do”

“NEED” … according to whom? Small children need security, responsive parents, and a safe environment. They need to be encouraged to explore and know that they have a haven to return to when they meet something that overwhelms them.

Most of the other things kids “need” to do are just arbitrary rules enforced by the parents. Some may be necessary, others may be merely for the convenience of the parent, such as a child sleeping through the night despite the overwhelming evidence that infants need to nurse at regular intervals, including at night.

Did I ever “make them do what they need to do” when they were crying? As little as possible, but of course it happened. If we had to leave and someone didn’t want to go in the carseat, of course they had to go into the carseat.

But, amazingly, not forcing them to do every little thing that I arbitrarily decided they “needed to do” created an atmosphere of mutual trust, wherein we had very, very few battles of this sort.

Because they knew they could trust me not to force them to do things they weren’t ready for, like sleeping alone or being left with strangers in an unsafe (as it seemed to them) environment, in return they trusted me when I told them they really did “need” to do something.

“Kids Won’t Do Anything”

I’m honestly not sure exactly what you mean by “they wouldn’t do anything” but my kids do plenty. They help around the house when I ask, sometimes with a little grumbling but usually not.

They like reading what I suggest for them to read and usually ask me what they can read next once they finish a book.

They enjoy hanging out together and working on projects together. My dad recently moved to town and my two boys have been volunteering to go over there and help him with all sorts of home renovation projects.

“Making Them” vs. “Guiding Them”

Parenting doesn’t have to be about the supremacy of the parent; acting as a guide and supporting your children in their natural stages works pretty well in my personal experience.

I’ve yet to see any “typical” teen behavior in my 17-year-old daughter or my 15-year-old son. They don’t yell at me, argue with me, or sneak around behind my back; instead they talk respectfully to me about any concerns they have, because they’ve been treated with respect all their lives. They are used to having their opinions, worries, and even differences of opinion listened to, so naturally they bring these things to me for discussion.

Oh, and they all eat just fine too. Thanks for the concern!