Learning to Read: How My Attention-Challenged Child Began Reading

– I have four children who have always been homeschooled. They learned to read in four very different ways, though there are some important similarities too (all four have me for a mother, after all). This is the fourth in a series of posts examining how each of my children learned to read. –

Each of my first three children began reading in very different ways. My fourth child’s reading story shows an interesting combination of traits from her older siblings.

When I realized that Kyler had taught himself to read by listening to Colter read comic books out loud, I investigated how much Mica knew already, since she had been in on all the bedtime reading sessions right along with Kyler.

She was only four, so I didn’t expect her to read as fluently as Kyler, but I was pleasantly surprised at how much she had picked up just from listening to Colter read aloud. She had the basics of phonics down pretty well and knew how to sound out words for the most part. As she went to age five and six, she progressed fairly easily through the reading stages with little help from me; I just read out loud a lot, as I had done with my older three children.

But she didn’t like reading. Not like Kyler, who just wasn’t much interested in the stories I helped him find. Sitting to read for more than about four minutes was tortuous for Mica. Sitting to hear a story was different – there was the social component of actually touching someone (a huge plus for her) – and she could wiggle and squirm to her heart’s content. So she would just listen.

Since the rest of the family was reading, she wanted to read, and tried to. I am a great believer in finding the right book to tempt the child to read, so I scoured the shelves for something that would interest her. None of my children had read the Junie B. Jones books, but looking into them I saw a child that might appeal to Mica’s personality, and I was right. She did enjoy Junie B., but still hated reading them herself. She would work through one in a week or two or three, in tiny increments spiced with shock at learning that she had not, in fact, been reading for a half hour but less than five minutes.

She was so wiggly and unfocused and distractible, we never, ever took her to the movies with us. By age seven we might take her to a short Disney movie … or we might not. Generally I would stay home with her while Dad took the older kids to the movie. Mica was constitutionally unable to sit through an entire movie.

This point was made crystal clear after we purchased the movie Avatar on DVD when she was six. The rest of us had seen it at the theater, but she saw it for the first time at home. She was incandescent with delight. Gamboling on the floor like a Na’vi (one reason we didn’t take her to theaters), she caroled in a single breath, “I love this movie! This is my favorite movie ever! Can we turn it off now?”

We asked if she didn’t want to see the rest of it. Absolutely, she wanted to watch it ALL … just not right now. So we turned it off and watched the rest of it the next day.

I’ve never held much truck with diagnoses of ADD and ADHD. Not that the behaviors don’t exist; rather that it is our modern life that doesn’t give these children a proper outlet, but instead expects them to conform to behaviors that are wholly unnatural to them. In other words, kids in a situation other than the four walls of a classroom where they are expected to sit quietly and obediently would not have a problem with behaviors that are normal for kids who are diagnosed ADD/ADHD.

But I could not deny that my sweet baby girl had a problem focusing her attention on anything longer than a fleeting few seconds. “This is boring!” was her go-to phrase for any activity she engaged in for more than three minutes.

So I was more relieved than surprised, when I took her for a vision checkup shortly fter her seventh birthday, to hear our vision doctor remark that she had a focusing problem and was in need of vison therapy. Interestingly, he diagnosed her with the same underlying focusing problem that her older sister had had. But due to the extreme differences in personality, nature, and temperament, her reaction was completely different.

Noa’s response was to hyperfocus on minute details (such as stacking fifteen stickers in a two-inch square and leaving the rest of the paper empty). Mica’s response, when focusing was difficult, was for her brain to say “Boring! … What’s next?”

(Which actually makes a lot of sense when you think about it. When you are bored, what happens? Your eyes wander off to look at something else. So when your eyes can’t focus and wander off on their own accord, your brain’s response is to assume that you must be bored.)

So our family began a second round of vision therapy in January. I will get around to that promised post focusing on vision therapy soon! Here I will just point out that according to our optometrist and others in the field of vision therapy, ADD/ADHD and vision difficulties such as focusing problems have almost the same list of symptoms.

“Up to 70 percent of children who are having difficulties in other areas of learning might also have a functional vision problem.”

As I said, Mica had all the basics of reading mastered. She knew how to decode and read and even understand … she was just so bored and fidgety that reading never happened. But, as with her sister, improvement happened fast. Within just a few weeks of starting vision therapy, her ability to sit and read for increasing intervals of time improved immensely. Soon she was knocking off a Junie B. book in a single sitting, and I was casting around for more stories to appeal to her sensibilities. An hour! My distractible daughter was sitting and reading for an hour at a time!

Of course we now own every Disney Fairy book, including the special editions and manga, but she was whipping through them so fast, I knew I needed to find the next series that might hold her flighty attention. (Yes, her attention is still fickle, it’s just that now she can concentrate on something if she wants to.) Disney Fairies sustained her through the spring and summer, but she was rapidly running out of books to read as her vision mastery improved.

Testing Her Own Limits

Fortunately, her best friend Z stepped in to help me out. Z is a year older and is an avid reader (in fact, she reminds me of myself at that age!). Z was telling Mica thrillingly of the adventures of a band of cats in the book series Warriors. I looked at Warriors and was a bit daunted on my daughter’s behalf: it is a densely written fifth-grade level book with a large number of volumes to read through. I didn’t want her to attempt it and become discouraged at this early stage in her journey of learning to love reading. When will I learn? Z gave Mica the first Warriors novel in our homeschool group’s annual fall book exchange. Mica started reading and wouldn’t put it down. Just like that, she went from first-grade fare to fifth, without a single stepping stone in between. She asked me to define a few words here and there (undergrowth and badger are two I remember) but she was immersed in the Warriors world and rarely came up for air. She and her friends now generally do “Warriors roleplay” when they get together.

Mica has begun to come upstairs each morning, book in hand, and curl up in our giant beanbag to pick up reading where she left off the night before. She brought a book to her grandmother’s house for Christmas! I hardly dared hope I would see the day when Mica was caught reading on purpose!

We finished vision therapy up just after Thanksgiving, which seems very appropriate to me. I am so thankful that my little girl has proper use of her eyes, and that she loves using them to read! She is still as wriggly and giggly and, yes, as hyperactive as ever, and I wouldn’t want a bit of that to change, but now when she wants or needs to focus on something for a period of time, she can.

She has even taken up piano again, which we had tried oh-so-very-very-briefly a few months before we learned she needed vision therapy. And she always packs a book in her bag to read when it’s her sister’s turn with the piano teacher.

Sadly, when I switched my blog from Winging It to Carma with a C, I lost a lot of things including comments! So I’m copy/pasting them when I can. 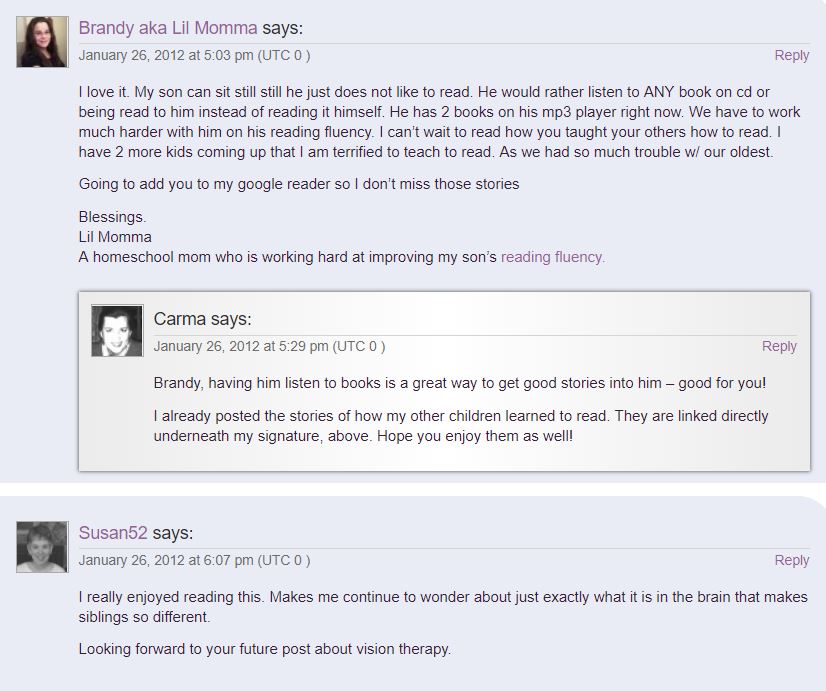