How We Unschool: Comedy, Comicon, and Driving Lessons

Here’s how we unschool lately!

1 ~ Time … okay, past time … for Noa to learn to drive! She will be 17 this fall, and earlier this week she finally went in for her learner’s permit.

I gave her the first driving lesson and was surprised to find she knows even less than I thought she would about actually working the car, despite 100 percent on the written test! (Now, there’s a great lesson on the reality of just exactly what tests do and don’t do for learning actual skills, eh?) Anyway, we’ve been out three times, in a giant parking lot and at a local park that has a long, winding, car-free road in the park that circles the area, and is a pretty good road simulacrum.

And now that it is the weekend, it’s dad’s turn to give some lessons. 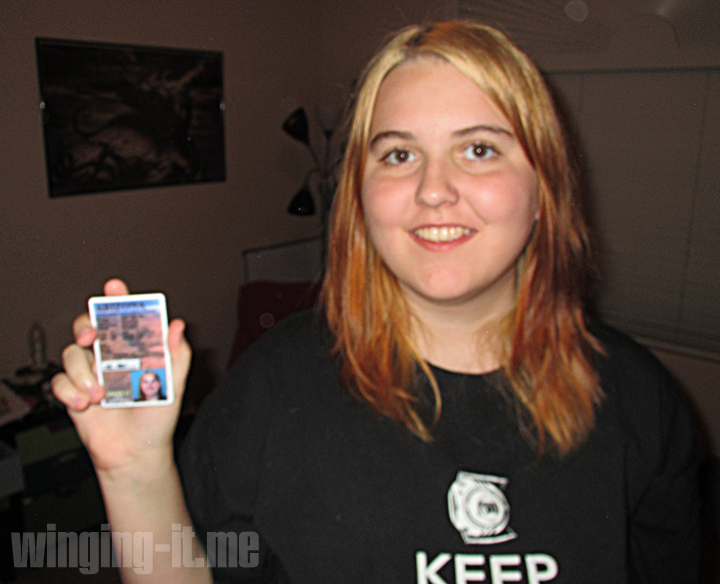 And yes, if you’re noticing her hair: she bleached. She had two inches of roots her own hair color, then old henna at the ends, so the bleaching resulted in two inches of blonde at the roots and bright red ends and gave a sort of groovy, glowing sunset effect. Being blessed with her father’s super-duper fast-growing hair, she already needs a touch-up.

(On her shirt, for those whose curiosity is boundless: it’s Wheatley from the game Portal 2 … whatever … and the caption says “Keep calm, I am not a moron.”)

2 ~ I wrote the sequence of Fibonacci numbers on the board and let my ten-year-old son and eight-year-old daughter reason out the pattern. Kyler finally figured it out, but not until his younger sister noted out loud that 1+1=2.

3 ~ Colter and friends learned that no one wins for long when playing King of the Sun Shelf (the oversized step in the pool), and alliances last even less time. I’m sure there’s a good life lesson in there somewhere.

4 ~ Colter has been taking classes at a local improv comedy club for almost a year. I can’t even begin tell you how glad I am he is taking these classes! Performing improv requires super quick thinking and an great deal of assurance in manner, and it really came at just the right time and to help him in his transition from a somewhat shy boy to a young man. This semester’s class is full of several of his homeschooled friends, which results in a lot of merriment on stage! 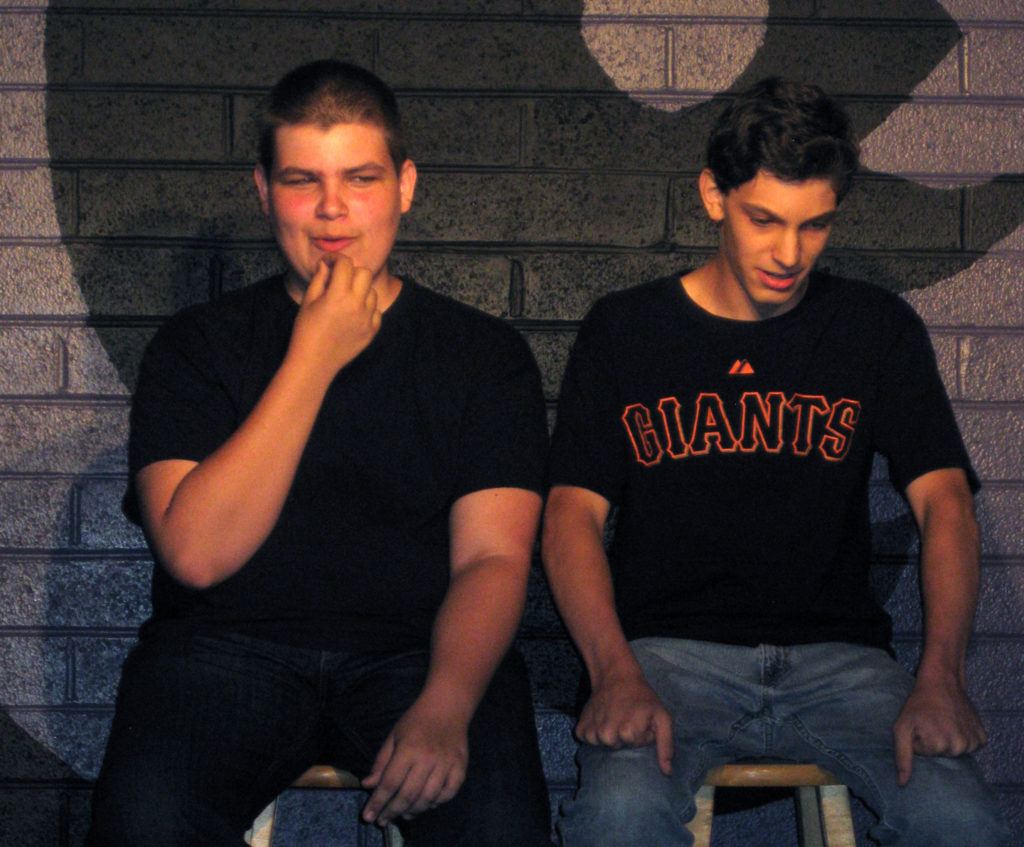 5 ~ Beginning of summer brings us the (very recent) family tradition of Comicon. First my oldest daughter went with friends (and a couple of parents) for a year, then her brother joined her the next year. In a big crowd of friends where nearly everyone has a cell phone, and a handful of parents to check in with, they have a blast attending all the classes and celebrity panels and just walking around looking at everyone’s costumes. This year my husband came on the final day and brought Kyler, age 10, for his first Comicon experience. They ended up coordinating their costumes from Adventure Time, a singularly ridiculous cartoon.

Here are Adventure Time characters Fionna, the Ice King, and his penguin Gunter. 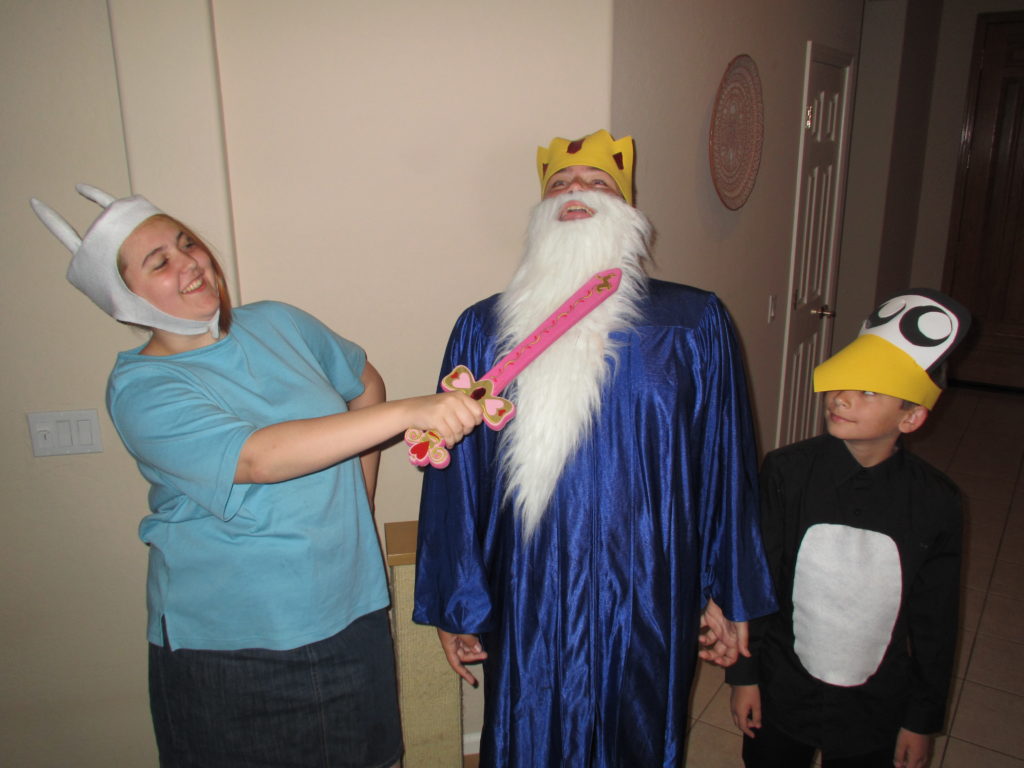 Fionna’s costume is just clothing straight from the thrift store, her little sister’s pink foam sword, and a hat she made herself. Oh, and a green bag she made herself too (had to have something to carry her drawing paraphernalia!). The Ice King is elegantly dressed in … a graduation robe. I didn’t have time to sew him a muumuu that would have looked like a dress anyway, and the robe was less than $20. Gunter has a white felt tummy tacked onto black clothing, and a craft foam head he and I made. 6 ~ Lest we forget, Noa of course sewed her own headgear and backpack for her costume! 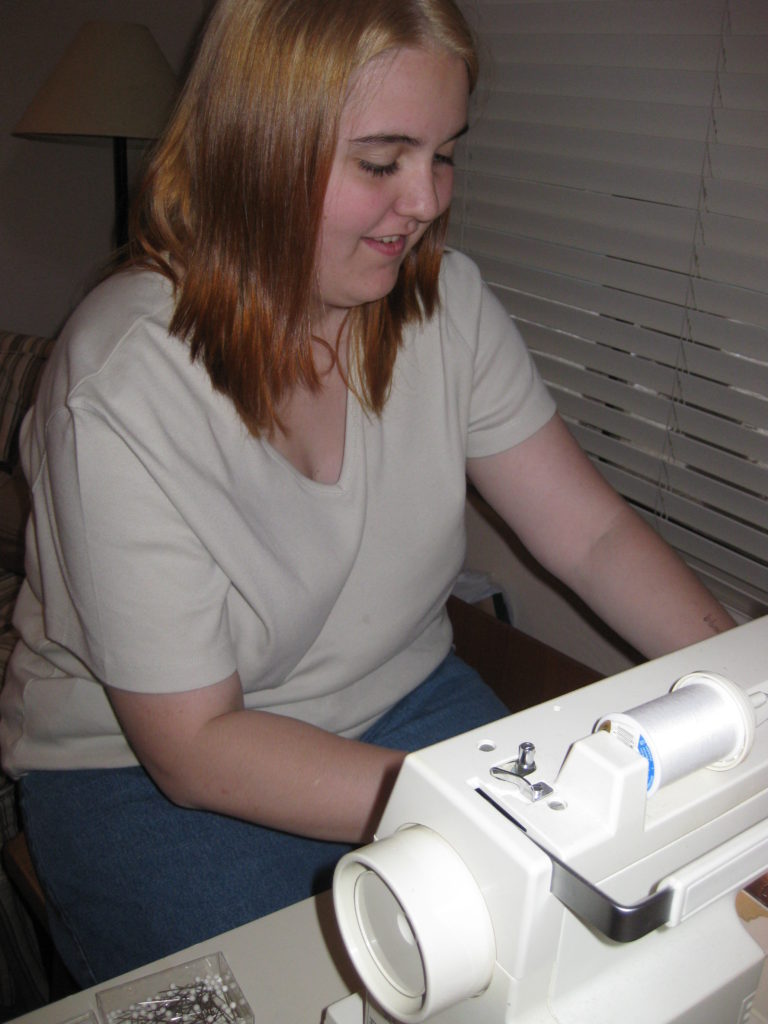 7 ~ And, of course, at the end of May we finally performed in Jungle Book. That is deserving of its own entire post, so I’ll just mention it here: it was great! We are blessed with a fabulous director who puts on two shows each year, Shakespeare in the fall and lighter fare in the spring, all for homeschooled kids. They have learned so much!

And their plays get seen! When Colter was walking around Comicon duded up as the Ice King, someone stopped him to say, “Hey! You were Colonel Hathi in Jungle Book last week!”