Reading by the Numbers 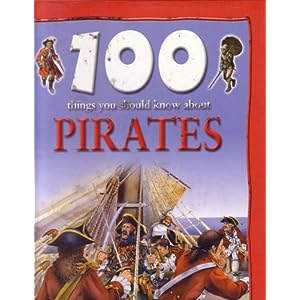 I love the Barnes & Noble-published series “100 Things You Should Know About Pirates” … or Explorers, or Rulers, or World History, etc. Good car and bathroom reading, nicely presented in tasty tidbits. I had a new one in the car and asked Nova (10) to read ten items aloud to Lock (who at 8 is just beginning to learn to read) and me.

Now, Mink just turned two, so when she was asked several times to “pick a number” she began looking around saying, “Numboh? Numboh?” Then she looked out the window, placed her hands on her cheeks and called out, “Numboh! Wheyoh?” [translated: Number! Where are you?] We finally got her to say two, her age. But we had already read two, so we doubled the digit for 22 instead.

Then it was Kyro’s turn. He wouldn’t say anything except the first letter of his name, so we counted up the alphabet until we came to ‘K,’ and used it for his number.

Did you know that Barbarossa means “red beard”?